Remarkable Healings by Shakuntala Modi - As Recommended by Jesus Christ

Below are excerpts from Dr Shakuntala's Modi's book "Remarkable Healings" which reveal the extent of how souls on Earth are easily infiltrated by earthbound spirits and demon entities and how souls commonly lose parts of their soul to other souls due to soul fragmentation. Dr Shakuntala Modi is a practicing psychiatrist and hypnotherapist. Many of Dr Modi's patients, while under hypnosis, report having demon and earthbound spirits attached to their bodies and energy fields, creating psychological and physical problems.
Attachment or Possession by Earthbound Spirits - Shakuntala Modi

I was greatly surprised when a past life of a patient during regression turned out to be the life of the spirit of a deceased person who was the patient’s father. Since that first occasion, several patients have reported finding inside them another spirit, a human soul separate and distinct from their own soul. This soul is reported by the patients to be a visitor or, as we say, an attached or possessing earthbound spirit who did not make its transition to the Light (heaven) after the death of its physical body and has remained on the earth plane.

The hypnotized patients report that the visiting or possessing spirits are influencing them and causing them problems, either intentionally or unintentionally. Before there can be any resolution of the patients symptoms and problems, all possessing earthbound spirits must be treated and released from the patients. This approach is not in keeping with the psychiatric tradition and definitely is not part of my training. This information is also not based on my beliefs or personal experiences, but solely on the experiences reported by my patients while under hypnosis. The guest entities found within my patients can usually be conversed with. They speak through the patient with the patient’s permission. Many of the visiting spirits report being attracted to my patients and admit that they joined the patients while they were physically or mentally debilitated after an accident, during a surgery, after a loss, or while they were under the influence of drugs and alcohol.

My hypnotized patients not only report having possessing human spirits inside their bodies, but also report finding black, gray or red entities that they say are demons. These demon spirits can also be conversed with through the patients vocal cords, with the patients permission and cooperation. My patients vividly describe the power of Satan and his demons to inflict misery upon the human race. Based on the results of my treatments, it seems that these demon entities are frequently the cause of many emotional, mental, and physical problems. According to my patients, these possessing demon spirits are the single leading cause of psychiatric problems, especially depression and its associated cluster of problems. Demon spirits have a greater influence in patients lives than any of the previously mentioned causes.

Patients consistently claim that these demon spirits have great powers, but with the help of God and his angels the patients are more powerful than Satan and his demons, and are capable of controlling them. Patients often report that Satan and his demons have only as much power as we give them and that Satan and his demons operate within limitations. This concept is in contrast to what most people believe. None of this information is based on any religion. During the treatment, only what my patients report under hypnosis is taken as evidence. No spiritual claims or suppositions are made. Their information is usually dealt with in a very straight forward, down to earth manner with no religious or spiritual implication or association.
Soul Fragmentation and Soul Loss - Skakuntala Modi

My hypnotized patients consistently report seeing their souls in their chest, neck, or head. They describe soul as an immortal energy essence, a part of God, which resides within each of us. It empowers the body, which cannot live without it. At the time of death, the body dies but the soul continues to survive. During the therapy sometimes patients were resistant to spirit releasement and past life regression therapies. As we searched for reasons for their resistance, they reported that their souls were fragmented due to some trauma. The soul fragments can stay inside the patient and appear as the patient at a younger age when the trauma occurred that caused the fragmentation or they can go outside the body.

My patients describe the soul fragments as similar to what we call sub-personality, alter personality, or an inner child in traditional psychology. However, there is a difference. The patients report that this fragment is not just symbolic or their imagination. They report literally seeing their child parts or personalities clearly inside them including their age, clothing, and hairstyles. Each fragmented soul part is still suffering from the memories and emotions of the trauma that caused its fragmentation and separation from the main body of the soul. Some patients report that the fragmented soul part or inner child is being controlled by the possessing earthbound or demon spirits. This relationship creates problems during the treatment.

Patients also report that portions of their souls are in the possession of other people. Husbands, wives, parents, children, and other relatives and friends are the most frequent possessors of the missing soul parts. Sometimes patients report that their souls parts were in possession of people who abused them physically, emotionally, or sexually, causing them continued fear and emotional turmoil. In these cases, patients are influenced by the abusers experiences, behavior, and problems. Sometimes patients claim that some portions of their souls are in possession of Satan and his demons who are outside and continue to reinforce their influence and manipulate patients thinking, attitudes, behavior, and emotional and physical problems through these captive soul parts.

Patients frequently report that they have possession of other living people’s soul parts. These soul parts of living people act in the same
way as a possessing spirit of a deceased human being and influence patients physically, emotionally and mentally. Treatment is usually stalemate and is less effective until these soul parts of returned, cleansed, healed, and integrated with their rightful owners. This is particularly true in the cases where Satan and his demons are the possessors of patients soul parts.

By recognizing all these possibilities, we can clearly understand that any emotional, mental, or physical disease is in fact the disease of the soul. To heal the mind and the body, we need to heal the soul by removing all the possessing earthbound and demon spirits and soul parts of the living people. Then we need to heal the traumas from the current and past lives by recalling, reliving, releasing, and resolving them and reclaiming all the lost soul parts from the current and past lives and integrating them with the main body of the soul. By healing the soul we can heal the physical body from its emotional, mental, and physical problems.
Demon Possession is Nearly Always Responsible for the Following Conditions 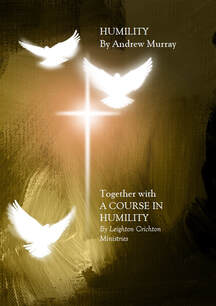 A Course In Humility
A Course in Humility is a free 1-year self-study course based on new revelation from Jesus Christ to help guide our soul into the Spirit of Christ. As pride is the "gateway" through which all dark forces have room to move in our life, walking a path of humility, as laid out by Jesus, will not only help us to block all dark forces, but will help to bring about our spiritual ascension into the Light of God. Click here for further details